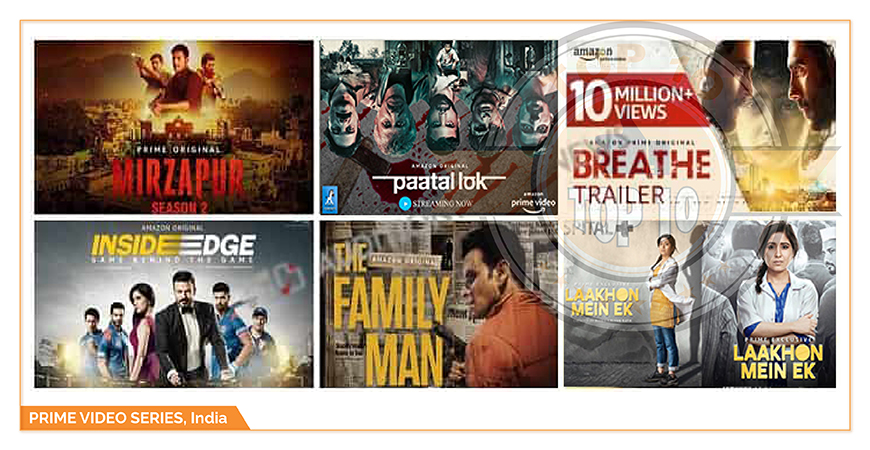 With only a few days left when we bid goodbye to 2020, a lot of things have shaken us up right from the beginning of the year and each and everything has been embedded into our minds like a scratch on a rock that never goes. While the world events, epidemic, tension at the borders, joblessness, agitation among people, and celebrity murder mystery have been on the headlines night and day, the TV shows did not lack the spices we all love to see. With closed movie halls, web series have taken the front seat and have never stopped entertaining us, putting us right on the edge of our seats. Be it Prime Video, Netflix, Voot, or Hotstar, web series have been the only antidote and our friend-in-need during the lockdown.

In case you’ve been a hardcore addict to these web series mentioned here, well, you can enjoy a throwback again. But if you’re not a big fan, it’s high time to binge-watch these top, best, nail-biting, entertaining web series of 2020 on Amazon Prime Video right before the year ends. With easy subscriptions on the channels mentioned, you can get any series you want with a click of your finger, at minimal costs. Over the years, Amazon Prime Video has amazingly ramped up their library of Indian original series competing with the other. There is no shortage of content streaming on Amazon PV. Let’s have a look at the best top 10 Web Series gaining fame on Amazon Prime.

After a stunning success and escalating expectations from the viewers for over 2 years, the second season of Mirzapur was finally in the air after a long wait. Another flick was needed that could compete Sacred Games and it was found with the hit series Mirzapur. With a gripping climax, tremendous performance, and the story of season one; the second season came as a pack of surprises and the introduction of several other characters that many did not expect.

Mainly shot in Mirzapur, the chemistry and intensity of Kaleen Bhaiya, his son Munna Bhaiya, Beena, Guddu Pandit, and Golu saw some fine performances and the next-leveled plot of revenge, politics, and the rule in Mirzapur. If you haven’t seen it, we won’t spill the beans on the spoilers. Go for it, you will not regret it and wait eagerly for a third season as well. It’s a treat to watch both seasons.

Plot: It depicts the story of the rule of mafia dons and the rivalry and crime prevailing in the Purvanchal region of Uttar Pradesh.

As soon as it was on Prime Video, Paatal Lok became an instant blockbuster based on all the crime series that will surely compete with this flick. Despite several crime thrillers that were released this year, Paatal Lok will still be held measuring the other crime series as well. It indeed was one of the best crime shows of 2020.

The plot revolves around a policeman who finds him being drawn into a hideous web of crime, violence, and a crime-divided society. Every move seems to sink into another deeper crime, exposing many people and their motive behind. This series gave us two outstanding performances by Jaideep Ahlawat and Abhishek Banerjee in their respective roles that are unforgettable. You just won’t feel like keeping the episodes for the next day, it’s that interesting!

Plot: A story of a delusional cop who is tasked with investigating a high-profile case of an assassination gone wrong.

Panchayat won endless hearts with its storyline and exceptional performances by Jitendra Kumar, Neena Gupta, and Raghubir Yadav. It’s a simple yet amazing plot that never seems to fade away.

The show builds up showing his struggle to succumb to the village life and the problems he faces out there. No wonder, it’s entertaining and heart-touching as well. Look out for superb performances and direction. It’s surely a must-watch!

Plot: Panchayat is the story of an engineer who has a dream to work in an MNC but due to no job availability, he works as Panchayat Secretary to the Pradhan in a remote village.

4. Breathe: Into the Shadows

A perfect, thrilling entertainer that was a huge hit to the web series Breathe, this is a must-watch. To save a child that how far can a parent go? That’s the plot in a nutshell.

Abhishek’s character in this series even removed the line of good and evil and weaved classic suspense altogether. Watch it for its amazing twists and turns and especially for Abhishek Bachchan and Amit Sadh – a cop and criminal case and chase. The series features Abhishek Bachchan, Nithya Menen, Amit Sadh, Saiyami Kher, and Hrishikesh Joshi among others.

Plot: The second season unveils a psychiatrist, played flawlessly by Abhishek Bachchan, who is forced to commit the crime to save his daughter from a mysterious man.

A beautiful musical flick that shows the journey of an Indian classical singer and a pop star, who have different personalities that create complications in their musical life and friendship. Will they, together, remove all the odds and find themselves rooted in their musical careers, or will their dreams go down the drain?

Wonderfully directed by Anand Tiwari, this web flick features Ritwik Bhowmik, Shreya Chaudhary, Naseeruddin Shah, Kunal Roy Kapur, and Atul Kulkarni. Enjoy some heart-warming music by Shankar-Ehsaan-Loy that will stay with you for a long time. Growing teens and young people will surely love this flick. Well, do not miss it!

Plot: It is the story of the love between Tamanna, a pop star, and Radhe, a classical music prodigy in Jodhpur.

A story of four lead female friends, Four More Shots Please had an excellent viewing in the first season and due to the praise of the first season, the second season came out on Women’s Day 2020 and was even much loved. This amazing romantic comedy featuring four female actors brings them back in season two where they live together, make silly mistakes, rediscover themselves, and keep their friendship bond quite strong. Starring Sayani Gupta, Milind Sonam, Kriti Kulkarni, VJ Bani, Lisa Ray, Prateik Babbar, and others, it’s a pleasure to watch all of them and their appealing performance.

Plot: It’s the story of four unapologetically flawed women in their 30s and early 20s as they live, love, make mistakes, and discover what makes them tick through friendship.

Dominated by Manoj Bajpayee’s on-screen performance as Srikant Tiwari, The Family Man has everything you wish – action, humor, thrill, and others. What we see here is Srikant, a dedicated family man, a common man working as an intelligence agent. His fast and wise moves and brainy decisions help him to get militants who are a threat to the country. With a small team of experts, Srikant sets out from Mumbai to Kashmir to stop the spread of terror. On the other hand, while doing his job, his personal and family life is affected. The entire story revolves around how he tackles both and manages to keep the pace.

Plot: Plot: The story revolves around the personal life of a secret agent, Srikant (Manoj Bajpayee) employed at an intelligence agency in Mumbai. Srikant’s regular day at work involves sleuthing and shooting, interrogating, and nabbing terrorists.

A sheer edge-of-the-seat thriller for cricket lovers, Inside Edge is undoubtedly one of the best Hindi web series on Amazon Prime that shows the rich and the famous and how the game of cricket is to them. The series has earned name and fame from overall and won awards under the best drama series at the 46th International Emmy Awards. Featuring Vivek Oberoi, Richa Chadda, Angad Bedi, Tanuj Virwani, Amit Sial, and others, the plot revolves around the controversies and facts that grip the world of cricket.

Plot: Inside Edge is the story of the Mumbai Mavericks, a T20 cricket franchise playing in the Power Play League. With enough twists and turns to cause whiplash, Inside Edge is your window into the world of the powerful men and women who run the game behind the game.

Ranked high with name and fame among the top Hindi series on Amazon Prime, Made in Heaven is the story is about two young wedding planners and their experience while conducting marriages. The web series is an amazing display of various characters, a mix of emotions, and a portrayal of expectations. Created by Zoya Akhtar and Reema Kagti, and featuring Arjun Mathur and Sobhita Dhulipala, it has been earning great appreciation from the audience. If you are looking for something light and sober, this is a must-watch.

Plot: Made in Heaven revolves around Tara (Sobhita Dhulipala) and Karan (Arjun Mathur), and their eponymous wedding planning company, targeting the city’s uber-rich.

Counted among the best Hindi web series on Amazon Prime, this particular flick is an eye-opener of several troublesome spheres of our Indian society. The series has two seasons – the first season is about the inner struggle and frustration of a teenager who is forced to stay at a coaching center to prepare for the IIT entrance examination. The second season is about a struggling lady doctor and her problems to enhance the health care facilities of a village amid corruption and a lack of help.

Plot: Season 1 was about the struggles of Aakash, a teenage student from Raipur who is sent to a coaching center Genius Infinity in Visakhapatnam for preparation for the IIT entrance exam while season 2 was about Dr. Shreya and her fight with the government for healthcare in Sitlapur Village.

Amazon Prime has won the hearts of millions and will continue to bring such mind-blowing series to our home screen. With the Covid19 still in swing, people are inclined to spend their time watching these entertaining web series of different genres that are being shown on Prime Video. Most of these web series has gained an amazing appreciation among the Indian crowd and others are on their way. We have narrowed down a list of series that you can begin with and quench your desire for these newly streaming web series. So, grab a bucket of popcorns and a warm drink this winter for a host of hot Amazon Prime classics right before your eyes.